You are here:Home»What we do»-- policy focus: disabled women

Disabled Women: our bodies, our rights

In 2017, Engender received funding from the Tampon Tax Fund for a project researching disabled women's experiences of parenting and reproductive health services in Scotland.

Working with disabled people's organisations in Scotland, and led by an advisory group, the project saw us speak with disabled women across Scotland to hear about their experiences of puberty, sex education, relationships, family planning, maternity services, parenting support and the menopause. Through consultation events, an anonymous survey, round-table discussions with practitioners, and focus groups led by the Scottish Learning Disabilities Observatory, we explored a huge range of issues relating to disabled women's reproductive rights. 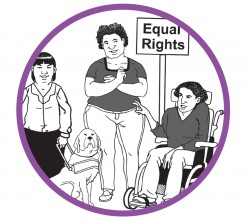 All of this research has now been written up in to a report which outlines the barriers to disabled women's reproductive rights.

It is divided into the key areas of:

and contains recommendations for Scottish Government, service providers and institutions to help realise the rights of disabled women.

Read 'Our Bodies, Our Rights: Identifying and removing barriers to disabled women's reproductive rights in Scotland'

You can listen to an audio version here:

We have also produced an easy-read project report outlining the key issues and recommendations.

Finally, Dr Jo Ferrie and Dr Phillippa Wiseman from the University of Glasgow produced an analysis of the survey and focus groups which were run as part of the project. You can access this additional research report here.

A supplementary gender edit of parties running in 2021 Engender has published a Gender Edit of the Manifestos published by each of the 5 parties elected to the Scottish Parliament in 2016, each of which is running in at least every region.

Engender Parliamentary Briefing: criminal trials during the Covid-19 outbreak The Covid-19 pandemic represents a crisis for gender equality around the world and in Scotland.

Engender response to the Scottish Government consultation on disability assistance in Scotland Engender has been engaged on work around gender and social security since the 2010 programme of Welfare reform and over that period we have sought to highlight the ways in women, who are twice as likely to rely on social security for their income, have been systemically and grotesquely disadvantaged by reforms.

Engender submission of evidence to Equality and Human Rights Committee inquiry on Impact of COVID-19 pandemic on Equalities and Human Rights Since the outbreak of the novel coronavirus in the UK, Engender has sought to draw attention to the highly gendered impacts of both the virus and steps to mitigate it.

Engender submission of evidence to the UK Parliament Women and Equalities Committee inquiry on Unequal impact: Coronavirus (Covid-19) and the impact on people with protected characteristics Since the outbreak of the novel coronavirus in the UK, Engender has sought to draw attention to the highly gendered impacts of both the virus and steps to mitigate it.

Engender submission to the Office of the Chief Statistician on: Sex/gender: Gathering and using data to advance women’s equality and rights in Scotland In order to make public policy and legislation that works for women, and that can advance equality and realise women’s rights, it is imperative that public bodies, including Scottish Government, generate and use data that captures women’s experiences.

Gender & Economic Recovery The economic downturn precipitated by Covid-19 is different from that caused by previous shocks.

International Women's Day 2020 Parliamentary Briefing This International Women’s Day adopts the theme Each for Equal, offering those of us committed to gender equality around the world an opportunity to reflect on our individual contributions towards securing women’s equality, including challenging bias and stereotypes.

ON THE BASIS OF SEX: Protection against discrimination on the grounds of sex and gender reassignment under the Equality Act 2010 This paper was written by Professor Nicole Busby, Professor of Equality, Human Rights and Justice, University of Glasgow.

Women & Unpaid Work: the impact of Covid-19 on women's caring roles Women’s equality cannot be realised while women still have do so much more childcare, care for older and disabled people, and housework than men.

Women and COVID-19 The COVID-19 global pandemic represents an unprecedented situation and the responses and aftereffects will have long-term consequences for everybody in Scotland, notably for women and women’s equality.