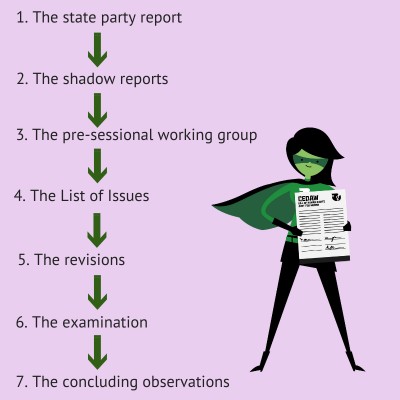 In 2017, the CEDAW Committee began its examination of the UK Government. The examination involves several stages, which are set out below.

The CEDAW Committee requires a report from the government of the country they are examining, known as the 'state party report', which sets out gender-disaggregated data, descriptions of policy, legislation, and programmes, and picks up on issues the Committee was concerned about in its previous examination.

The UK Government’s state party report was released in November 2017.

To contextualise what it's told by the state party, the Committee accepts shadow reports from civil society organisations, which often differ sharply in views and emphasis from the government's version of events. The Committee also hears from National Human Rights Institutions, and in 2018-19, Scottish Government also submitted a statement to the Committee.[4]

Four civil society organisations were funded by the Equality and Human Rights Commission (EHRC) to produce civil society ‘shadow reports’ for each nation of the United Kingdom, as well as a collaborative ‘four nations report’. Engender was the Scottish organisation commissioned to collect evidence on current issues regarding women’s rights in Scotland, and develop a list of questions for the CEDAW Committee to ask representatives from the UK Government.

Engender engaged in civil society consultation while writing the Scotland shadow report, including:

Once the shadow reports are in, the Committee examines them and delegates a sub-group to decide on specific areas of focus. At the pre-sessional working group (PSWG), this sub-group of the Committee meets with civil society organisations to get a steer on areas that they want the Committee to focus its list of issues around.

The Committee then produces something called a ‘List of Issues’, which is a set of questions and areas of clarification that they then write to the state party about. The state party (in our case, the UK Government) then writes back to the Committee with some answers and evidence.

The List of Issues was released in August 2018, and responded to by the UK Government in November 2018.[7]

There is a final opportunity for civil society organisations to feed in substantive thoughts, by revising its shadow report to start to set out recommendations.

The revised shadow Scotland and four-nations reports were released in January 2019.[8]

The examination itself takes the form of a long Committee hearing. The UK Government representatives open with a statement and CEDAW Committee members ask questions, following the order of CEDAW articles.

During the examination process civil society organisations can challenge the statements being made by civil servants by providing their own evidence directly to Committee members.

After the examination, the Committee produces a set of draft 'concluding observations' that set out areas where action needs to be taken by the state to address outstanding violations of rights. The rapporteur with responsibility for the UK examination, who is a Committee member, will meet with civil society organisations one final time to hear final thoughts on what should be in the concluding observations before she or he begins to draft.

The Concluding Observations of the CEDAW Committee were released on March 29th 2019.[9]

CEDAW: a superhero for women in Scotland Often referred to as the ‘women’s bill of rights’, the Convention on the Elimination of all forms of Violence Against Women (CEDAW) is the UN’s human rights treaty devoted to women; it spells out in detail women’s human right to equality and non-discrimination, which states that have ratified it must then act to realise.

CEDAW: Follow-up to Concluding Observations Scotland Report This report follows Engender’s engagement with the eighth periodic report of the government of the United Kingdom on measures taken to give effect to the UN Convention on the Elimination of All Forms of Discrimination against Women (CEDAW).